In general I’m not attracted to old machines like many guys in my age bracket (I’m in my sixties). I’m generally not nostalgic, and I understand firsthand that modern technology in our cars and motorcycles makes them function and perform so much better than “back in the day” that there’s no comparison. I do, however, have a special, and uncharacteristic, affinity for the BMW “airheads”.

BMW’s aircooled opposed two-cylinder motorcycles were first introduced in 1923 and finally discontinued in 1995. Needless to say they were updated along the way. As someone who has studied, owned, and appreciated these machines for most of my life I’ve concluded that the late-70’s vintage machines represent the pinnacle of the airhead universe; the best balance of their charming old-school qualities and BMW’s attempt at bringing this old design into the new world of the 1980s and 1990s. This means the /7 models produced from 1977 through 1979. Incremental improvements BMW made from the 60’s through the early 70’s were meaningful, but the early 80’s saw BMW making updates in the interest of meeting emissions standards and so on that to me attempted to change these simple and elegant machines into something they just weren’t… modern, high-performance, and emission-compliant. Thus the /7 models IMHO represent the sweet spot.

So what’s the attraction for me to these old machines when I’m such a fan of what fuel injection, ABS, and active suspension provide for us? Well, there’s just something about the way these stately machines glide down the road with their unique and charming sound that I’ve grown to appreciate over the years. They transport you at their own pace and in their own manner. They are dignified and idiosyncratic at the same time. Those who actually work on their machines appreciate the quality of the materials and construction, very German. The bottom line for me is that a ’70’s vintage airhead just has a look and feel that connects with me, and that’s what motivated me to take on this project a few years ago.

Never one to not have a project active, in 2014 I decided that acquiring a /6 or /7 airhead that I could tinker with and putt around on would be a good idea so I started monitoring craigslist to see what was available. I found this R75 advertised in a nearby city and did a quick bit of research on the model to refresh my memory:

The R75 (750cc displacement) had been around for several years produced in the early 70’s as the R75/5, then the R75/6, and finally the R75/7 for one year only, 1977. It was morphed into the R80/7 the following year. Experts who are deep into airheads will tell you that the R75 was the best all-around displacement airhead with the optimum balance of smoothness and longevity with more power than the earlier 500 and 600cc models. The R75/7 was thus a 1 year model in the USA, and only 1,473 were imported into the US.

I arranged to see it and was soon in the midst of reacquainting myself with /7 airhead technology as I checked this one out. Having owned several airheads I assessed it as fairly typical for a nearly 40 year old (at that time) motorcycle. Nothing major seemed wrong, the patina was about average for its age, and what I did find in need of attention was about what I expected. I concluded it would make an acceptable starting point, though not special, and negotiated the purchase details. Once home I took a few pictures so as to record it’s “before” state, and set about writing a list of the parts I would need for the thorough maintenance update it would need. With a bike that old every single maintenance item would need to be checked from engine oil/filter to wheel bearings — leave no stone unturned.

Then it started to happen, as I peeled off the body parts and other items over the next few weeks while waiting for the parts I had ordered I became a victim of that insidious disease that afflicts many of us in this kind of circumstance… scope creep. It starts innocently enough… “well if I’m going to fix this I might as well do that”, and “a new part would sure look better than that old one”, and “gee there is this upgrade for the ignition, this cool billet upper triple-clamp available” and so on. As one who derives deep satisfaction from well done work I should’ve know it would happen.

And so, this little “do some maintenance and putt around on sunny Sunday’s” project turned into a full on frame-up restoration.  It didn’t take long and a vision emerged — I like the aesthetics of the older airheads with the classic pure black with white pinstripe look, but appreciated the /7 advances and was also aware of quite a few meaningful 3rd party technology upgrades that were now available. Thus emerged the vision for this “restomod” project… it would have the best of the classic airhead look, yet avail itself of most of the higher-tech upgrades to create a best-of-both-worlds result. I could easily visualize the finished product and so set about realizing it.

You know how it is, life gets in the way, so this project which I estimated would take about a hear and a half ended up spanning about five years. I’ll break the project up into four phases for documentation purposes:  before, disassembly, reassembly, and finished and primarily let the pictures tell the story.  I think you’ll be able to tell from the pics (gallery links below) that this was a no-compromise project. Once I had decided to go all in on a bare-frame restoration each and every part on the bike was evaluated. If it had excess patina or any wear it was replaced with a new OEM part, period. All parts that were kept were refinished in the appropriate manner to restore the appearance and function to as close to new as possible. Certain other parts were replaced with newer aftermarket options such as the electronic ignition, improved output alternator, billet top triple-clamp, and so on.

If you’re read this far and are still interested I suggest you peruse the four photo galleries linked below, then also review the work log I always do for my projects. Note that this is a summary and doesn’t include every minor detail but does list all the major assemblies and what was done to them. Suffice to say that whenever in doubt I bought new OEM parts. Clearly I set a standard for the result I was after and just wasn’t willing to compromise on anything.

I hope you enjoy at least looking around! 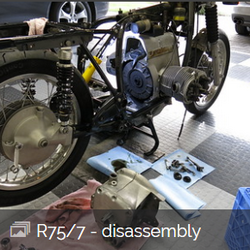 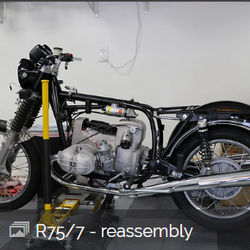 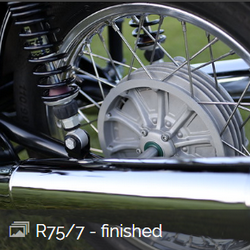 In all this has been a very enjoyable project. As one who has been a DIYer my entire life, including restoring or rebuilding several motorcycles and cars and building two aircraft, it’s been fun and satisfying to realize my vision for this bike with no regard to budget or time. The result is I think a better-than-new example of a classic BMW airhead with modern, yet not visible, upgrades incorporated. The result is an updated, and I think beautiful, example of the genre from what many consider the peak of the airhead vintages.